In 2014, Biocat continued to participate actively in the Council of European BioRegions (CEBR), which Biocat CEO Montserrat Vendrell has presided over since 2012. In 2014, CEBR created the Global Cluster Biomarker Programme, a directory of commercial and academic biomarker stakeholders. The directory aims to help forge partnerships between participating clusters and organizations, helping raise awareness of the potential biomarkers have for clinical research and other applications.

Exploring ways to accelerate business partnership between Europe and the United States in innovation and development, particularly in e-health, was the aim of the workshop held in Boston in June 2014 with more than 60 specialists from research centers, companies and governmental institutions in Europe and the United States. The conclusions of this event, entitled “Accelerating EU-US business collaboration in health/e-health research and innovation: opportunities, barriers and best practices”, were presented in a report.

This initiative is part of BILAT USA 2.0, a European bilateral coordination project that aims to improve and develop associations and collaborations in science, technology and innovation between the European Union and the United States. Biocat is a partner in the project.

Under the framework of this project, Biocat also co-organized a workshop for experts on “Enhancing EU-US research partnerships”, with the National Cancer Institute (Maryland, USA) and the Nanotechnology Characterization Laboratory, and helped organize a policy workshop at the main EU-US Innovation Conference (January 2015).

ELIXIR aims to build a sustainable European infrastructure for biological information, supporting life sciences research and its translation to medicine, the environment, bio-industries and society. The main aim is to bring together European laboratories and data centers to help coordinate the collection, quality control and storage of the massive amounts of biological data generated through studies in the life sciences. For the first time, ELIXIR is creating an infrastructure that integrates data from research around Europe and ensures uninterrupted service that is easily accessible to all.

The Industry Advisory Committee, which the CEO of Biocat is now a member of, was created in order to provide ELIXIR with strategic top-notch advice from independent experts, including SMEs, suppliers and editors. The final selection of the 11 IAC members was done through open nominations. 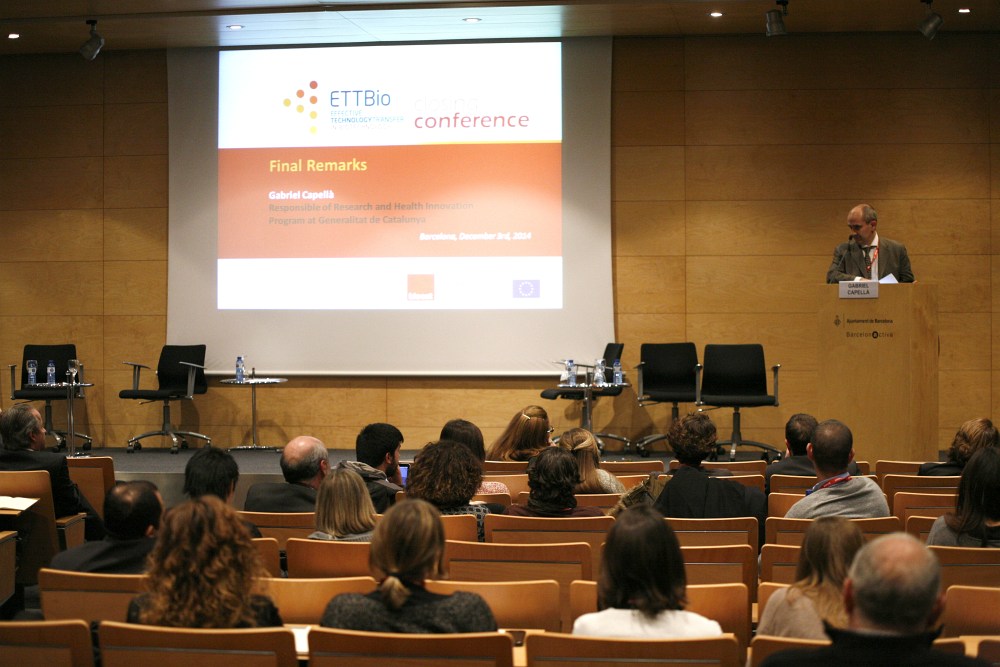 Gabriel Capellà, Head of Research and Innovation for Health at the Health Department, during his speech at the ETTBio ceremony

Additionally, 2014 saw the regional closing event of ETTBio Effective Technology Transfer in Biotechnology, a European project in which Biocat is a partner. Funded by the European Union (ERDF - European Regional Development Fund) with support from the Interreg IVC program, this biotechnology-focused project analyzes the shortcomings of existing policies and practices to identify opportunities for knowledge exchange and to share best practices to allow for successful, effective technology transfer.

In December 2014, Biocat organized an event on encouraging entrepreneurship and technology transfer in Europe as the regional closing event to the project. The event featured three workshops, which were designed with the main contents and conclusions of the Implementation Plan and the Report of Policy Suggestions for the BioRegion of Catalonia in mind. These two documents are the main results of the ETTBio project and feature proposals to improve technology transfer in Catalonia.

Among other topics, the workshops analyzed new collaboration models for innovation between the public and private sectors, emphasizing the need for participation of large companies in public research and to foster venture capital investment in the BioRegion. To this end, two successful examples of technology transfer were presented: BioEmprenedorXXI and d·HEALTH Barcelona, Biocat’s postgraduate program to accelerate innovation in healthcare technology.

Other activities that took place under the ETTBio program were participation in the CebioForum 2014 in Lodz (Poland), where Biocat presented the BioemprenedorXXI and d·HEALTH Barcelona programs, and an event in which representatives from the City of Warsaw (Poland) and the Barcelona Science Park met to analyze and provide guidance on models for incubating start-ups.